This Scots Pine, recently arrived into Northern Ireland, hade been featured in Peter Warren’s book, ‘Bonsai’ published by DK. This showed its first styling by Peter.

When it arrived here it was obvious that in the interim it had undergone further changes and refinement.

The tree was ready for the next step and the new owner asked if I would do a little work on it. I was going to wait a little longer to allow the new foliage time to harden but it was surprisingly resistant to a tug on new needles. So with a soft touch I set about following the framework already set in place before. I discussed the tree with Adam the new owner and we agreed on a front but knew the tree had been set up for either side to look the part. My reason for the left lean being the front was the added depth the foliage created and the better base to the tree.

This is the back but styled to give the tree a great look all around.

There’s a few little bits of deadwood that might be distracting but I’m leaving them to see how the tree matures, they can be removed later by the owner if he feels the need.

It’s been a busy week down in the South of Ireland doing some one to one sessions with friends from Cobh, Cork, to Limerick then Dublin. Some good times had and great trees played with. A little styling and refinement and, as you’d expect, some repotting.

Here’s some photos from the trip.

snow on the way home as usual in Dublin. Thank you to all who supported the road trip. Back again images weeks for another round.

I run a study group once a month for some friends who want to learn more. This has become two separate groups, one on a Friday evening, one on the Saturday morning.

This Weekend we were putting together some trees with rock.

First up was this shore Pine which had some initial work done by Peter Warren in 2017 and was recently rewired by myself.

The tree in September 2017 as raw material.

The work. The original plan had to be changed after the heavy roots on the tree wouldn’t let us place the tree on the highest portion of the rock. We looked at other planting options and liked the drama of the option selected.

If you are reading this and are within travelling distance of Newtownards near Belfast feel free to join us once a month for sessions like this.

I was asked to work on this Korean Hornbeam and on Wednesday I managed to grab a few hours to get it wired. As is common with hornbeam, many branches had crossed or where curling inward. This was a reset for the tree to get structure back on track.

Tuesday was a first session with a new customer. Paul has been doing bonsai for a while but has decided to up him game. I spent the day helping him with a few projects and some repotting. Paul’s garden is pretty special too. Here’s some photos of the day.

I collected this Larch about 3 years ago. I was drawn to the natural shari created by wild goats, Sadly some of the branches didn’t open that Spring after collection, the goats really know how to strip bark! I let it sit and establish for a few years and in 2015 put it on my sales bench with a view to moving it on as raw material suitable for a workshop. It obviously didn’t inspire anyone and so I decided to give it a basic shaping a few weeks ago.

This is the before shot. 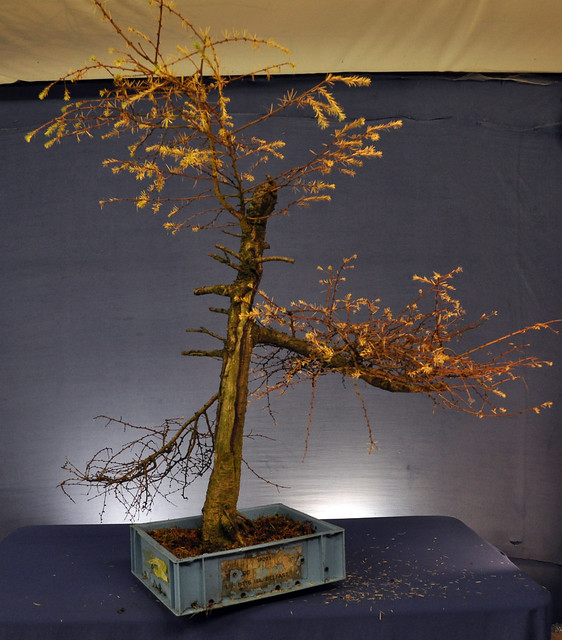 After a quick look I opted to remove the one live branch at the apex. This had been a twig 3 years ago and had grown strongly but was to far removed from the interesting bits elsewhere on the tree. With the help of my mate Jeff we did some basic stripping of the deadwood and got some wire onto the heavy lower branch. We played with keeping the other branch to the back, but it just didn’t fit with the image.

This is it afterwards. Still cleaning up to be done at this point and a few adjustments but the basic shape is there with some extra branches left as options. 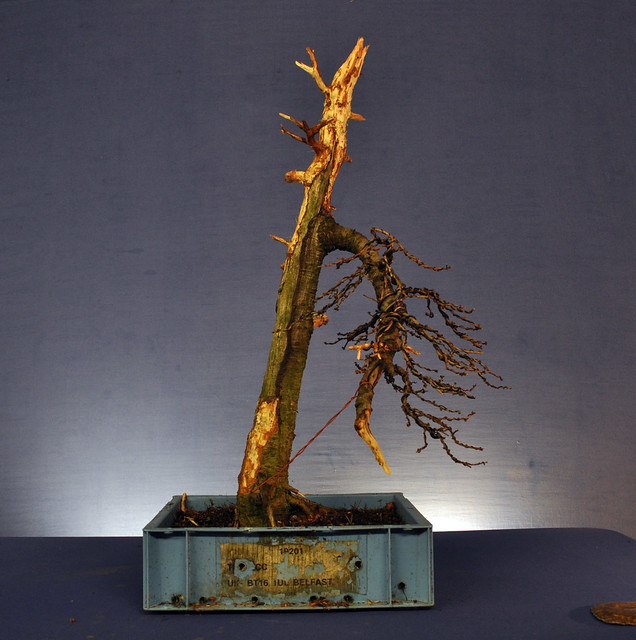 After checking the roots out I decided to go ahead and repot. In the 3 years since collection the tree and filled the box with roots. I put all collected Larch into pure Sphagnum moss and they love it. The problem comes when the moss breaks down and holds too much water, usually after 2-3 years. At this point I repot into a more traditional mix. I was able to jin a heavy surface root as part of the process making a nice new feature and also with the added benefit of raising the deadwood up above the soil surface which will help stop the wood rotting away to quickly.

This is the tree now, cleaned up and lime sulphured, with some more refinement of the deadwood and a year or two’s ramification I think it will make a nice albeit unusual image. A fun piece of material to play about with and for now, it goes back on the sales bench once it opens in the Spring. 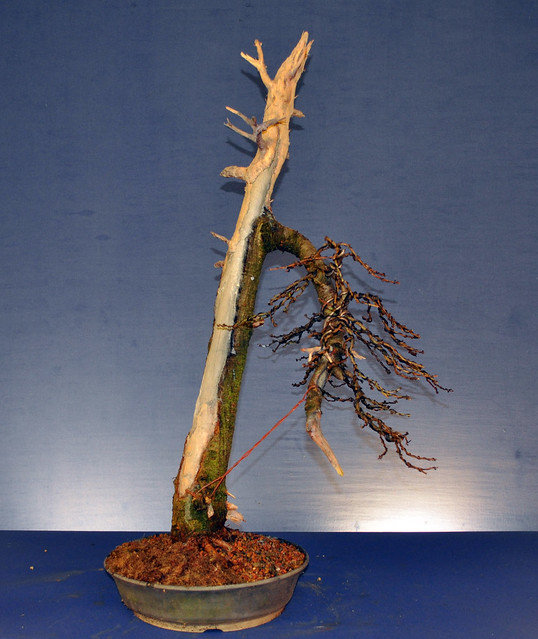 I have been working on this Atlantic Blue Cedar for a few years. I wanted one in my collection just for the colour and managed to salvage this one from a garden. It was originally 25 feet tall and it stall has a very tall feel to it but then those that know me know that I like tall trees. Not much taper, a bit of a fence post but I have always liked a tall tree with dropping branches.

This is it before I started work, branches had sprung up a lot since being dewired last year. The tree had fallen from a bench about 18 months ago and lost a large portion of the bottom branch on the right. This will take time to fil and now needed to be brought further to the front again.

This is it after wiring and styling. I added a few fine shari to the branches that had sprung the most. I’m hoping that this helps set them more permanently. I compacted the apex more and have used foliage to break the trunk line a little more.

Back on the bench adding that splash of colour.

I like the fullness of the restyled image. Almost shows the tree at it’s peak before it starts to go down hill, it happens to the best of us! It has put out decent growth since the last restyling and will hopefully continue to improve as an image.

Some videos I have watched recently on Youtube. It’s Saturday night now. Pop open a bottle of beer and relax.

This one was interesting to do.

After getting my own larch sorted out, attention turned to Stephen’s one.

This is it sitting at Stephen’s house. When we worked it out, it hasn’t been wired in 8 years. The last styling was done by Marco Invernizzi back in 2004.

Photos from then can be viewed here.

It’s a big tree and we wanted to try and complete the wiring in one day. Phil collected the tree in his van and we transported it to my garage for a little space to work in. Stephen’s bonsai studio was only build for hobbits and I’m definitely not that size 🙂 This it is photographed before we started.

About now you are probably having a close look at the base of the tree. Yes, it’s a strange one, it’s hard to see but there is a strong root that runs directly under the trunk lying parallel to the ground. This will be exposed to help show stability. There is another option, but that’s for another day!

The three of us got to work and managed to get the wiring completed.

One area that was a problem was the apex. It had been created from a single branch curled around to make it look fuller at the time. 8 years on this has become a problem. It could have been hidden by placing branches over the offending bits but could not be removed totally and make a convincing apex. We discussed it and Phil was keen to make a change rather that it becoming progressively worse with time. He came up with an option and Stephen decided to go for it.

This is the offending apex.

Keep an eye on him Stephen 🙂

The final image. Stephen is considering a change to the top jin, what do you think? Remove, leave, shorten?

A closer look at the base.

Before and after side by side.

The 3 amigos for scale, and just for fun.

We did this work without looking back to Marco’s styling in 2004. It was interesting to compare now having looked for the original photo.