This is an Escallonia collected from my garden back in 2001. It had previously been growing in another garden unchecked for 50+ years. I collected it along with about 10 others that I gave away to club members over the years. This one I put into my own garden as I didn’t know what to do with it at the time being brand new to bonsai.

Cutting back for a closer look

Yep, it’ll do, cut back further

Trenched for ease of collecting

Out at last, not easy, it was well rooted!

Cut back and into it’s training box

What made me think of using an Escallonia for bonsai? Answer: This tree displayed by Mr Oakton at Gingko Award 2001. When I saw it in the show I couldn’t wait to get back home to get this one out of the ground!

I let the tree have a period of free growth and then did a little branch selection. Peter Snart of Willowbog Bonsai was over for a visit and he helped with some of the initial carving work which I refined the following year.

One of the angles

Roots exposed for repotting in November 2002

Into a better pot and front selected

I posted a few photos of the tree on the IBC for comment and possible virtuals. I did a few myself and was pleased with the results. Here are a few I did and a few from IBC members.

This one was close to the current image

By September 2003 the tree had grown rapidly. I allowed the apex free growth at help with the taper of the trunk line at that point. Marco Invernizzi was over for a workshop and he gave me some guidance with the future of the tree and helped define the live veins. The tree has 3 veins spread around the trunk.

I disappeared from bonsai for a few years. Work,  family commitments and health reasons kept me from doing any real work on my trees. Water and the odd trim was all they received. This means that I don’t have many photos of this period. The next few photos are from 2009 when I managed to dig the camera out.

Filling out and ready for another trim in 2009

Free growth allowed to try and get those flowers budding

A closer look at the deadwood and live veins

I decided to repot in the Autumn/Winter as I was troubled by some of the rotting deadwood. I wanted to inspect this and treat asap as leaving to Spring could result in further rotting.

I had been considering a change of angle as the front to improve the tree. The forward facing branch was bothering me.

When I checked the deadwood I found two areas that needed attention. Part of the trunk was hollow and one area of deadwood was going soft with rot. These where treated with wood hardener. On removing the tree from the old pot I wasn’t surprised to see the amount of fine root. The tree had been particularly to water this year as the density of roots wouldn’t let the water penetrate.

I was able to remove a lot of the root which assisted with treating the deadwood.

Root base after cleaning with a hose

I had asked Peter Snart from Willowbog Bonsai to look out for a nice pot for the tree. He knew the tree well and selected a pot that he had been keeping for himself. It’s an oval with a reddish glaze from Walsall Ceramics.

Trying the new pot out for size

After much consideration about changing the front I opted to tilt the tree more to the right and remove the forward facing branch. This was trimmed back with a view to removing it in the Spring.

Decision made and tree repotted

This area now needs some work to make it more interesting and to get rid of those dead roots.

I had been looking at the tree since Spring bud break and knew that some work was needed. I only planned to give it a trim and leave the work to another time. But one thing led to another and before I knew it I had the wire out.

I wanted to lower some of the heavy branches and fill in some of the large gaps within the canopy. This was it before I started.

By using a few guy lines here and there and a little trimming, I finished with this. 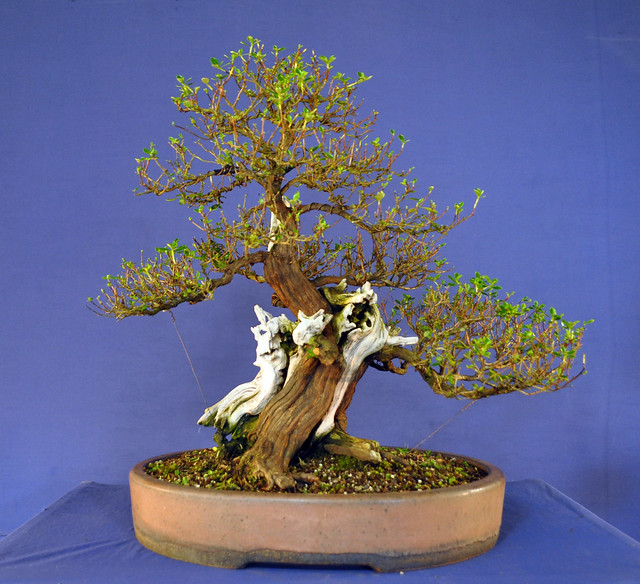 November 2012, some efforts to help preserve the deadwood on the tree. A little additional carving and a clear out underneath the tree so that the three live veins act like a tripod keeping the deadwood raised above the soil. Wood treated with wood hardener to preserve what was left. 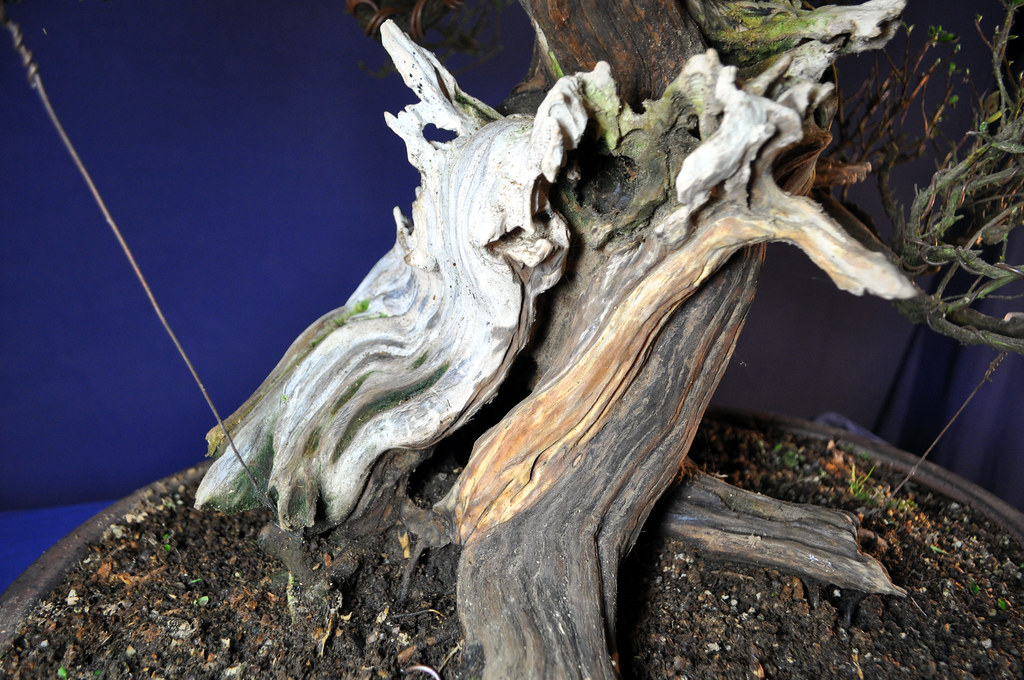 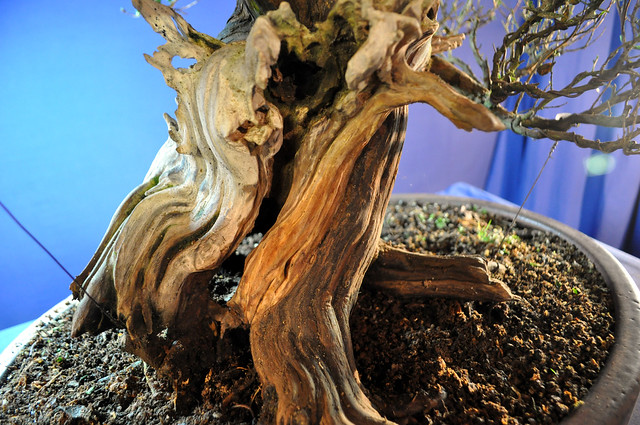 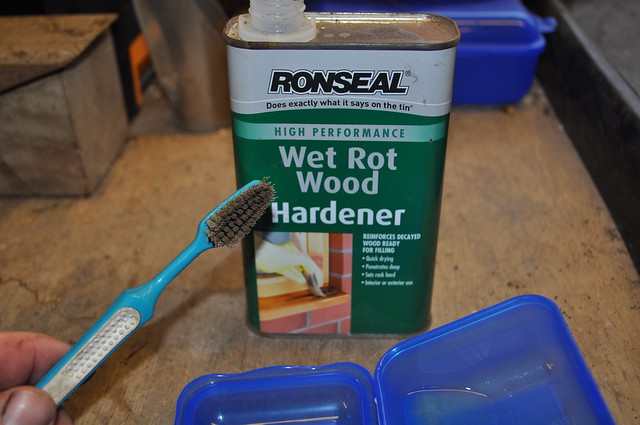 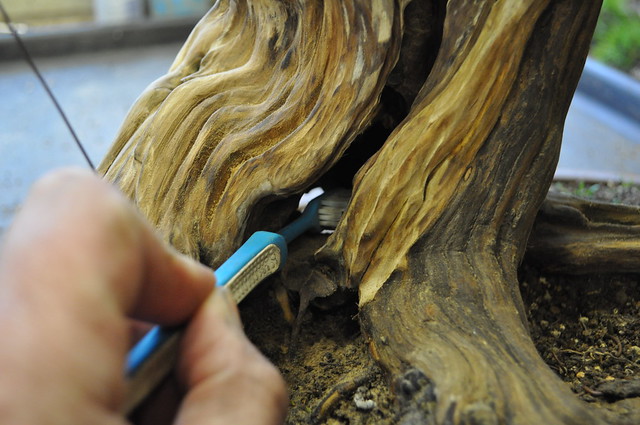 And then a final coat of lime sulphur for the tree. From now on the deadwood will be left to fade and give a more natural look. 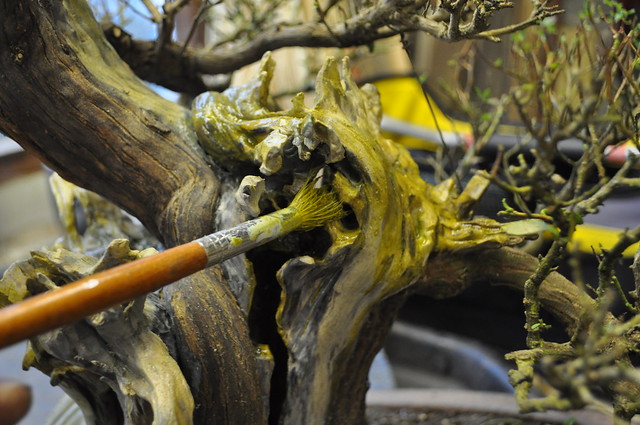 April 2013 now to start building up some decent ramification. 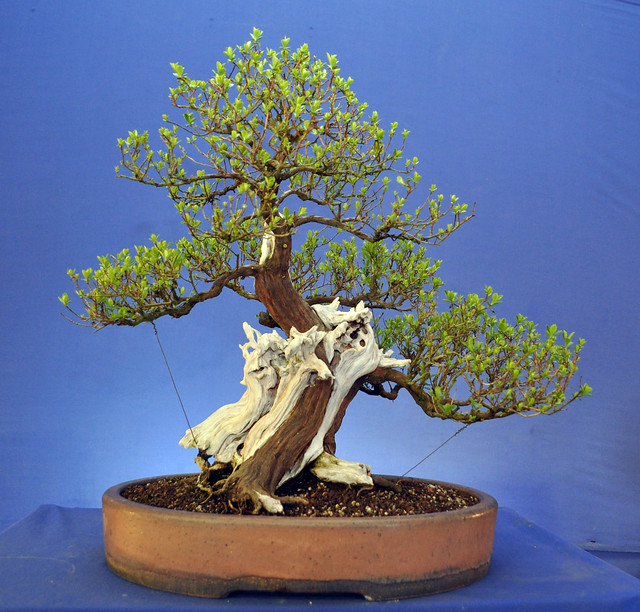 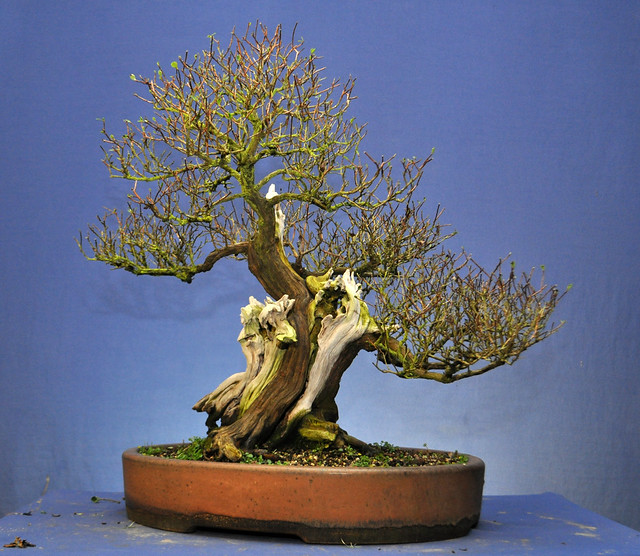 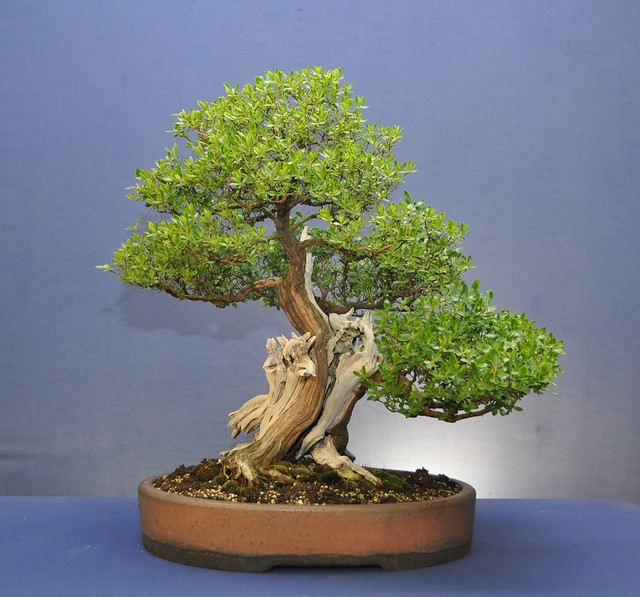 September 2015 – starting to prep the tree for exhibition at Bonsai Europa. I had a stand made for the tree by a friend. 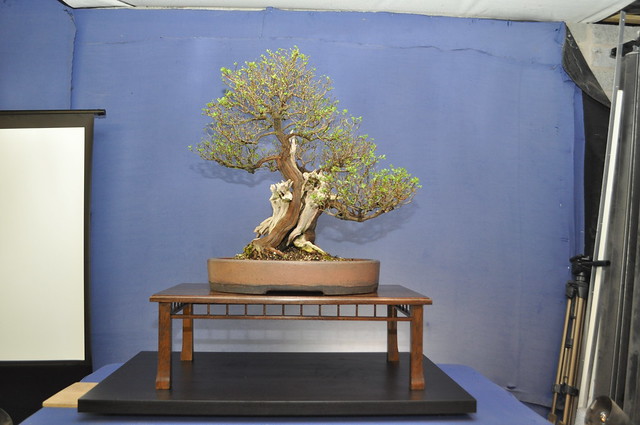 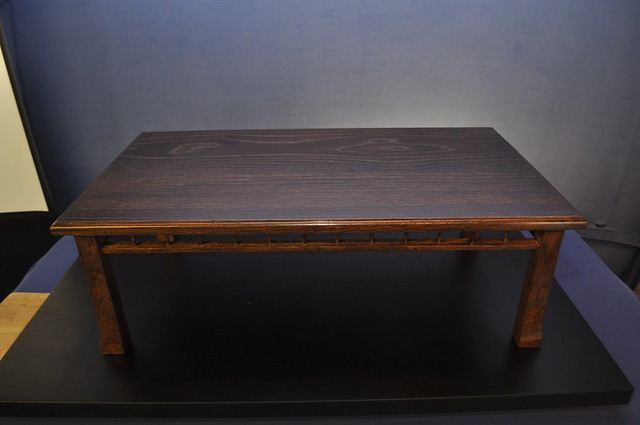 and then prepping the tree. Mossing the soil surface… 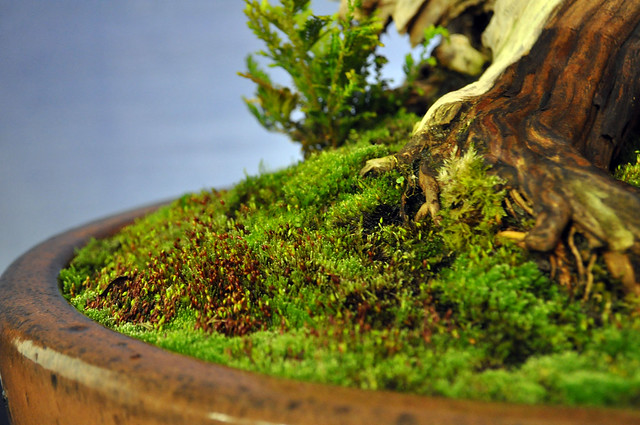 Live veins oiled about 2 weeks before the show to give a darker colour. 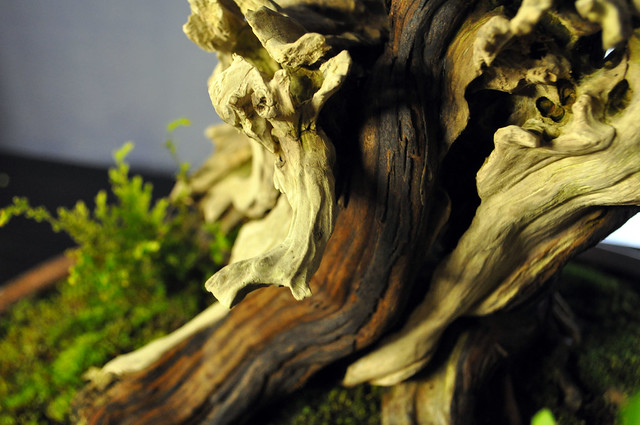 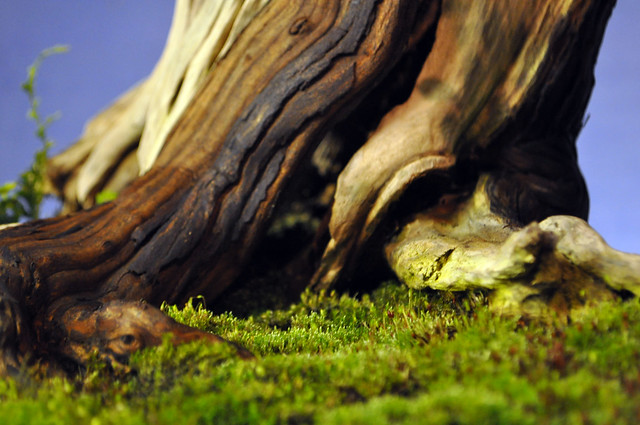 Not an ideal time of the year to exhibit an Escallonia but worth the effort. Seen here ready for the road to Manchester and Bonsai Europa. 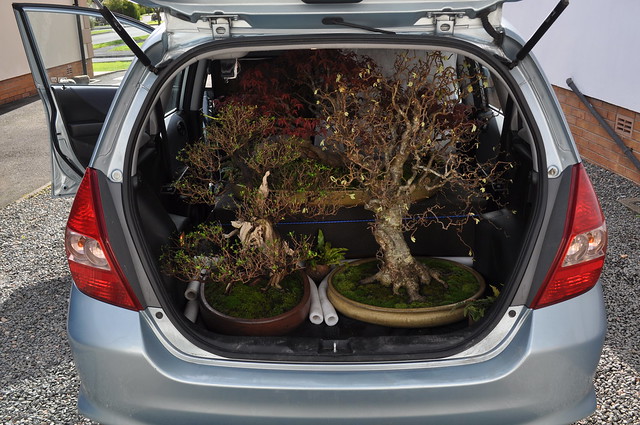 Getting the official photo before staging. 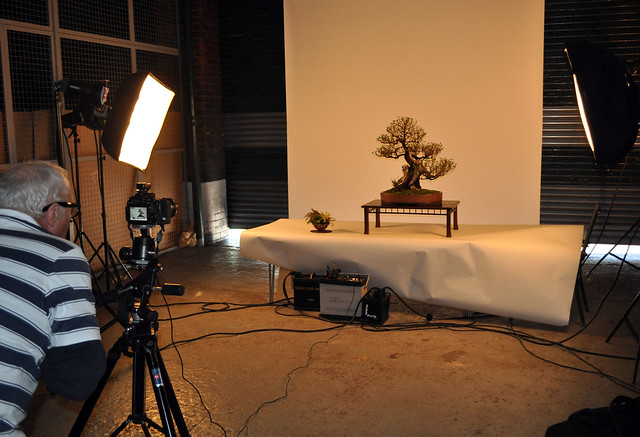 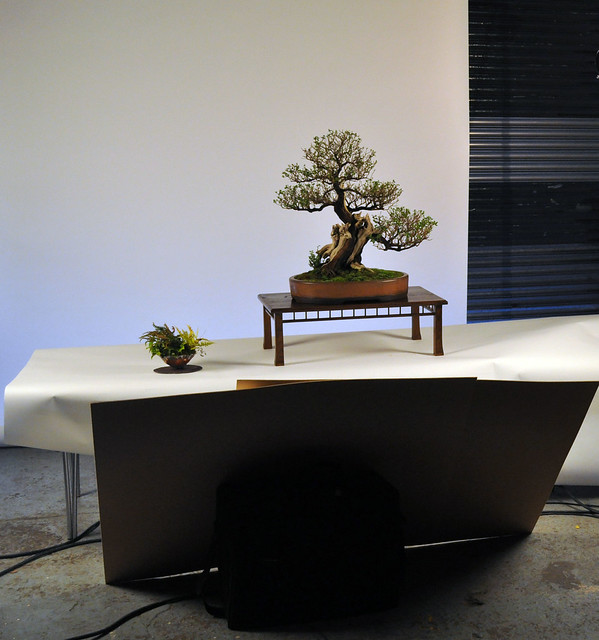 And how it looked on the display stand. 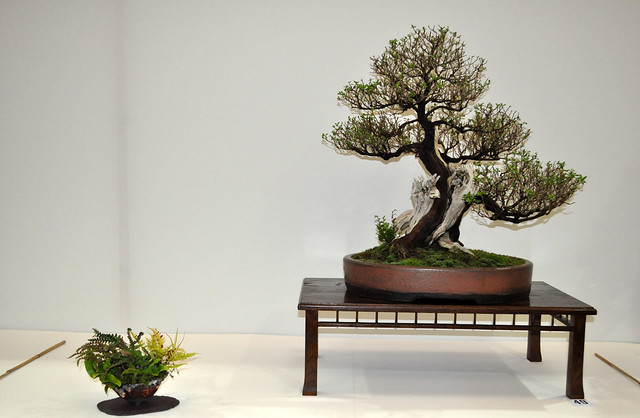 Chuffed to have a tree exhibited at a show of such a high standard. 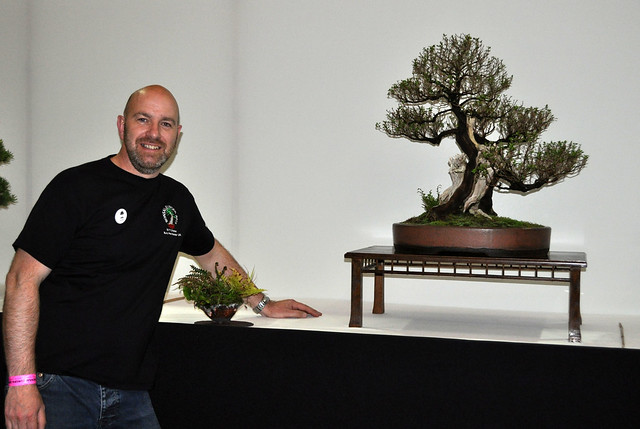 And the official photo. A long road but worth all the effort. 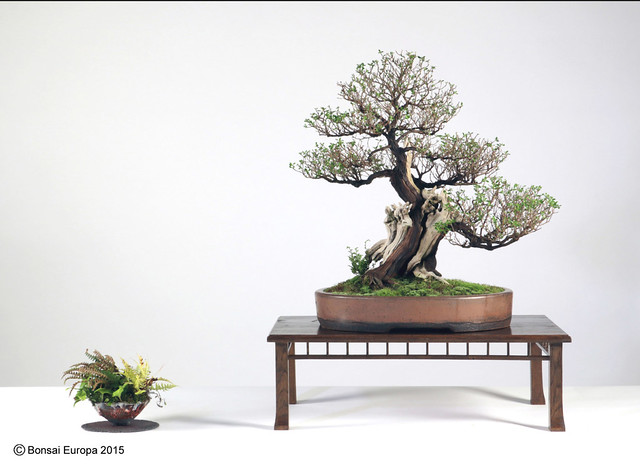