A Mugo Pine that was gifted to me by an great lady called Valerie. I have watched this tree progress for many years since she first brought it to a club workshop with Willowbog Bonsai probably the guts of 15 years ago now. A tree that was upright, leggy and lacking hardly any branches back then. I only wish I could find the original tree photos. Valerie brought the tree back every few years and slowly the tree progressed.

I did a little needle thinning and bud selection this week and perhaps sat looking to the future for the tree. I think next year will see a few changes. The problem with good care and application of technique is that sooner or later you reach a point were you revert the tree back to a green dome if you don’t pull branches out of the design. As a semi cascade this tree shouldn’t look as full as it does, especially in the crown. After that work is done I’ll need to reassess the pot. By adding negative space and some deadwood I think we can age the image.

Valerie if you’re reading this, it’s in good hands 😀

Alot of trees seem to be having a good year as far as flowers go. I have seen a lot more flowers on pines, Scots, Mugo and Japanese White.

This ones a Mugo at Stephen’s house the other day. Anybody else seeing more of this this year?

This Common Juniper also at Stephen’s only had to be touched to raise a cloud of pollen. 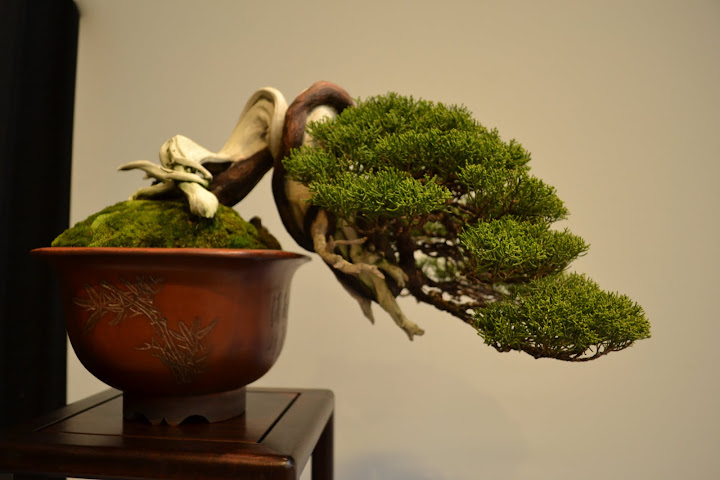