I did a live post yesterday from the bog while we were collecting Scot’s Pine. It was a rare sunny day and as usual turned out to be one of the highlights of the bonsai year. Good company good craic, and good results.

Funny story, guess who forgot to put the memory card in the camera? Yep me! Luckily Stephen had his camera with him and I copied his card Phew! This means that I was actually in a few photos and there is evidence that I do actually do a little work.

Highlight of the day for me was watching Phil Fingers stepping into a hole and sinking into freezing water up to the knee. The usual abuse was given only for me to find a different hole a few minutes later. 😀

We cut back a few larger trees to collect at some point in the future. The land owner says that they’ll still be there for a while and we are the only people who he trusts to collect on the site. Therefore we can go longer term with a few of them.

We collected a few smaller ones and finished early enough to get everything potted up in the one day.

Here’s some photos courtesy of Stephen.

Off with it’s head! 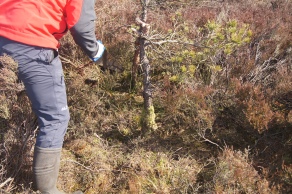 tiddlers at the end. [Stephen and Phil 🙂 ]

I may have mentioned a few weeks back about swapping some accents with Xavier in France. He has kindly mentioned me on his blog showing the Soldanella that I sent in flower.

Here is his Soldanella and the lovely pot that he put it in. If you want to know more about the pot, read his post here. Google translate is my friend 😉