Back in July 2011 while on a family holiday I had the pleasure of visiting Rick’s garden in Florida. See here for a post from my visit.

You’ll see from the original post that I commented about a Ficus that Rick had on his Bench. This is the tree as I saw it.

Rick and I discussed a few options for the tree. Now I’d just like to point out that I don’t visit folk for the first time and start telling them what to do with their trees, especially species I don’t know a lot about. However Rick asked, so I offered a little design advice with this one. I really liked the nebari at the back of this tree and suggested this to Rick. The long straight section was also an issue for me and seeing just how quickly Ficus respond to hard pruning, I suggested a chop as an option. Never did I think that he’s actually take me at my word and carry out the work!

Well, yesterday Rick Facebook messaged me and I quote,’ Ian, when did you visit my garden? You suggested I turn this Ficus around. I chopped it off and did just that…..you are the man!’

Again I’d like to point out that yes I am ‘a ‘ man, but most definitely nor ‘the’ man 🙂

Attached was this photo of the tree now. 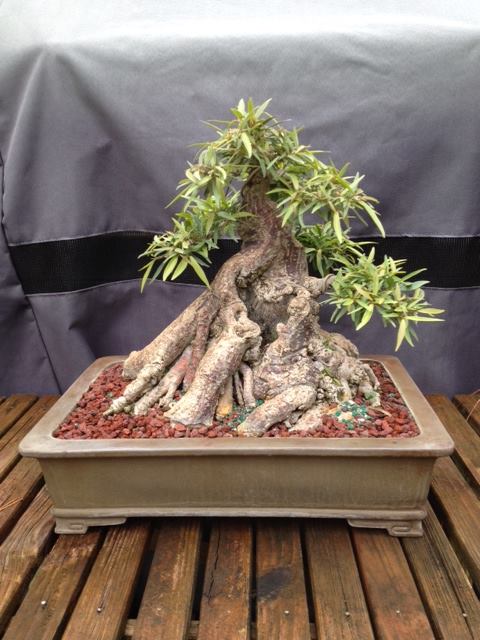 It’s easy to offer advice, the hard part is putting it into action. Rick has done a great job over only three years and created a squat powerful image which will mature nicely.

Here are few older photos of the tree and the chop in progress.

Now Rick, I want to see this Bougie 3 years on and what have you done with the Holly? 🙂