About 200 metres from my hotel was the Botanical Gardens. A nice place for a walk and some great specimen trees.

A nice Davilla, the local variety.

A stunning big Ficus in the middle of the Gardens. So many mature aerial  roots that are now trunks.

Some stunning flowers throughout the gardens.

The beginnings of new aerial roots on another ficus.

Whilst in Tenerife I had the pleasure of finally meeting up with Jose Acuna. Jose and I have swapped a few plants over the years and chatted on Facebook but I never crossed paths with him until now. Jose kindly picked me up from my hotel and showed me around his collection. I had a great few hours with him chatting all things bonsai. Interesting to chat about the major differences in climate, watering, species etc, between Ireland and the Canary Islands. They have heat and light but crap water. We have no heat and poor light but loads of great water lol.

Here are some of Jose’s trees, some fantastic shohin among them.

This great little juniper won the 2nd World Shohin Photo Award  The submitted image can be seen below the one I took on my visit.

Some of Jose’s awards displayed on his workshop wall.

I also fell in love with this pot. Truly beautiful carving.

I’m kicking myself for not taking a few photos of the pots that Jose made himself recently. Some very nice work.

Thank you Jose for taking the time on your one day off to show me around. I’ll maybe see you again soon 😉

This retirement lark is good. I had a last minute holiday recently to Tenerife and the Hotel Botanico. I can not praise this place enough, a top notch Hotel and Spa.

The usual photo on the way in.

Arrival at the hotel.

First ever letter with a wax seal lol

Mount Teide from the balcony.

The Hotel gardens were special.

The spa and hotel pool areas.

and to top it all, the hotel had it’s own Bonsai collection ! They hold a workshop for guests every Tuesday morning but sadly that was my day or arrival and departure, so I missed it.

I never recommend hotels to people as everyone has their own tastes, but this place I would recommend to anyone. Gandalf was even staying there 🙂

My friend JP Reitz has a superb album of photos from Saulieu up on FlickR. 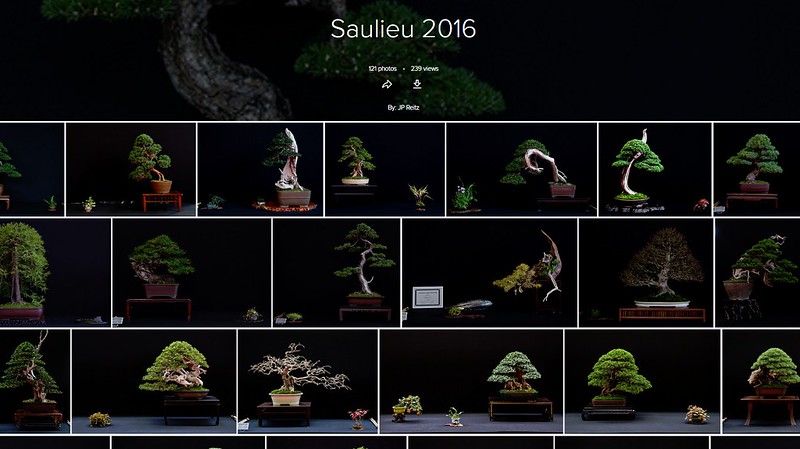 A while back three collected tosho which had been grafted with itogawa shimpaku foliage came to the nursery. They came from a nursery not too far from here but, they had been commission grafted by Iura-San some time ago.

They were sold as a group, at one price. They were only bought to sell as business tree’s to buy, style and sell quickly.

All three tree’s were raw and it was a first styling they had since being grafted.

Two of the tree’s were chunky and were pretty much just a case of bring branches down and make pads. I did these first but, haven’t posted about them.

The third tree was of the least value being a more skinny bunjin.

As you can see from the photo’s the material has some interest but, is rather boring especially in the middle section.

My idea to in fact solve this issue…

On November 5th Bonsai Eejit and Belfast Bonsai, Phil Donnelly and I, are hosting our final joint workshop opportunity for 2016. Approaching 50 years of Bonsai experience between us, we can tailor the session to meet most needs on the day.

This is an ideal opportunity to evaluate deciduous bonsai and do some wiring. Pines, Larch etc  can be brought for wiring and styling. If you have a tricky project that requires more than one set of hands, then this is a great way to get direction and assistance. A range of carving tools will be available if you require them. Feel free to bring multiple trees for working and advice. Workshop open to all levels of experience.

The workshop runs from 10am to 5pm, in Newtownards and includes a snack lunch with tea and coffee on tap during the day. Total cost for the day is £30 per person. Bring whatever trees you wish to work on and other material will be available if you wish to purchase a suitable workshop tree. Spaces are limited so to avoid disappointment please register asap by emailing me at bonsaieejit@gmail.com or using the contact me tab at the top of the screen.

In addition to the work that is done on the trees to get them ready to show, behind the scenes work is done which rarely shows…unless it’s done wrong.

We’ve historically done a good job with tables; extending the legs with PVC pipes to bring them up another 15″ makes a big difference. Tablecloths, felt runners, and sojii screens transform the space into a great exhibit hall venue.

This year, Kathy Shaner helped us take it up another notch. I served as grunt labor just to stay close to the tips and tidbits she’s always offering to those willing to listen. She’s a great and experienced teacher. Here are a few thoughts that stuck in my mind.
Make straight and even rows:

Make a big statement at the entrance!

Arrange trees to point directionally toward the center of the row.

Arrange smaller trees as 3-point displays. Even if they’re not…

I’ve got out of the habit of sharing videos here over the last year so I thought I’d add a few now that caught my eye. We used to be starved of good video content but recent years have seen the likes of Bonsai Empire and Bjorn Bjorholm really push up the quality of what’s out there. Here’s a few recent ones in case you missed them. Make sure to subscribe to the channels.

In case you missed the event last year, here is a short video:

A few more photos, this time from St Fiachra’s Garden within the National Stud. A beautiful and peaceful spot. I could have sat all day.